This past weekend, we attended a costumed event at a friend's house.  My costume called for a pair of evening shoes, which I don't own.  I improvised by digging out an old, old, pair of dance shoes that I remembered having a glittery silver brocade.

As I put them on, I noticed they were in shabbier condition than I had remembered, but hey, it's a costume party at a dining room table - how important are my shoes?

As I tried to buckle the ankle strap, from which the original dye had long since worn off, the synthetic fabric making the strap had sort of melted into a gum-like substance, and couldn't be completely secured.  No matter; it's on well enough to walk from house to car into house.

Anyone else probably would have recognized the signs and selected another pair of shoes.  Not me.

It wasn't until we were seated in the dining room, about forty minutes into the party that I wondered about the breeze I felt on my right foot.  As I shifted around, the right shoe began to feel oddly looser.  And looser.  And a bit flappy.  It was only when I looked down that I realized the extent of the situation: 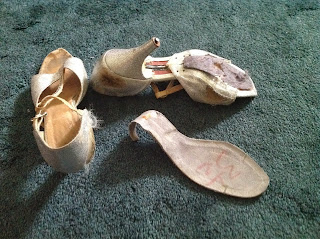 My shoe had disintegrated (over time in the closet) and had given up at the dinner party.
At this point, if you've made it this far, you're probably wondering why this is a blog post.﻿  See, that wasn't just any pair of dance shoes.  It was my first ever pair of dance shoes.  I probably bought them in 1992 or 1993.  They were 20 years old, had been danced in a lot in their day, and with pretty sweaty feet (oh, the things we share with the world).
I haven't worn them in years, but have been saving them for sentiment.  Finding ballroom dance changed my life.  Finding I could teach it changed it again.  It has made me a little overly attached to what should be trash, but in my heart is treasure.  And that's why I'm keeping them.
Posted by TonyaB at 9:51 AM

Welcome to No Frills Dance

Promote Your Page Too